SARS-CoV-2 is a new strain that was discovered in 2019 and has not been previously identified in humans. The COVID-19 virus officially reached South African shores on 5 March 2020 and was confirmed by the National Institute for Communicable Diseases (NICD).

On Sunday 15th March 2020, President Ramaphosa announced that the COVID-19 outbreak has been declared a national state of disaster in terms of the Disaster Management Act.

Standard recommendations to prevent infection spread include regular hand washing, covering mouth and nose when coughing and sneezing, thoroughly cooking meat and eggs. Avoid close contact with anyone showing symptoms of respiratory illness such as coughing and sneezing

A Dialogue on Water Quality, Sanitation and Hygiene in Light of COVID-19
A Dialogue on Need for Mainstreaming Non-Sewered Sanitation Solutions (NSS) – Lessons from COVID 19 Response
Dialogue on “susceptibility of food security and safety (urban and rural areas) due to coronavirus (covid-19)”
Dialogue on “COVID-19 and Beyond: Building Resilience Through Transformative and Nexus Approaches”
The Launch of the National Programme for Monitoring COVID-19 Spread in Communities Using a Water and Sanitation-based Approach 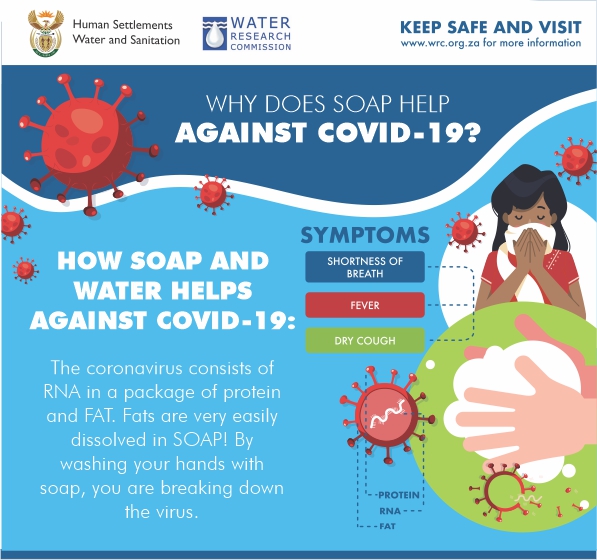 For all queries related WRC special call on Covid19: covid19@wrc.org.za